Testing and monitoring of water quality at existing wells

The Federal Foreign Office states that 663 million people worldwide have no access to clean water (as of 2015). Many factors can endanger drinking water. In some countries arsenic in drinking water poses a major health risk. Continuous intake can have a carcinogenic effect on the human organism, among other things. Particularly affected countries in Asia are Bangladesh, India (West Bengal) and North China (Smedley et al., 2002).

The research group Hydrogeochemistry and Hydrogeology of the Institute of Geosciences at the University of Heidelberg has gained profound knowledge about the behaviour of As in the aquatic environment through many years of research and has investigated geochemical processes involved in sorption and mobilisation. In the district of Pabna, up to now, from September 2015 to April 2017, water has been taken from private domestic wells and irrigation wells as well as near-surface groundwater and analysed in the GEOW laboratory. 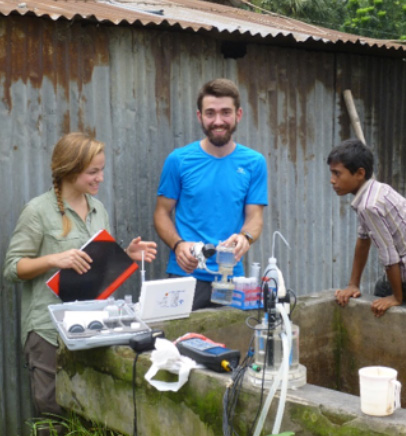 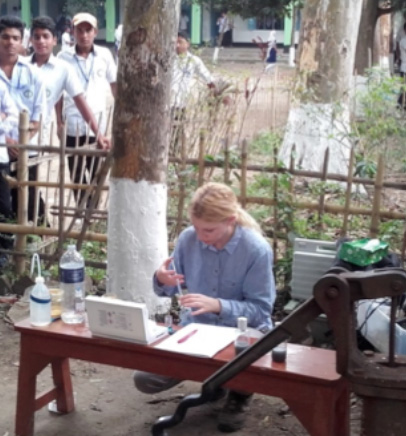 Figures 1 and 2: In 2015 and 2016, the first samples were taken to understand the processes of arsenic mobilisation. 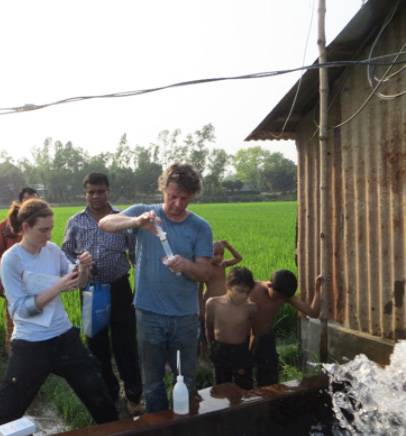 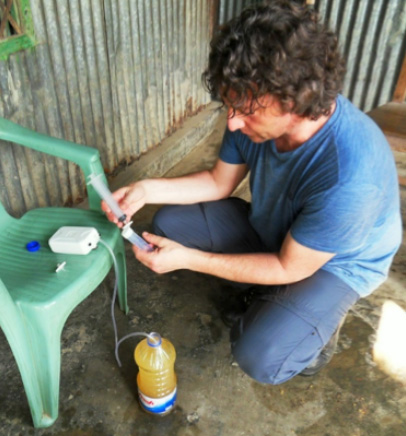 Figures 3 and 4: Freestanding irrigation wells were also included in the investigations. First measurements on site show that the dissolved iron in the water often precipitates quickly under the influence of oxygen. 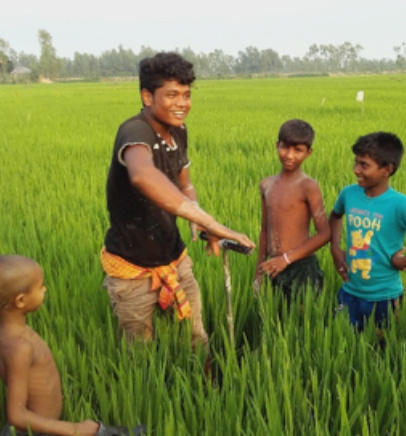 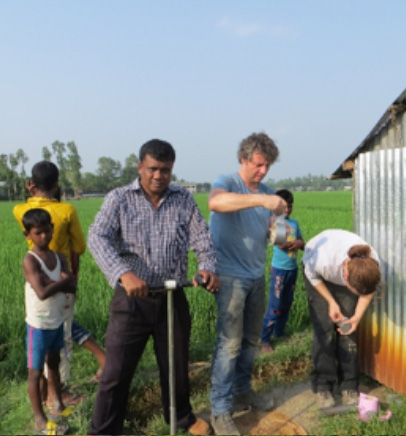 Figures 5 and 6: Sediment samples were taken from the topsoil and deeper layers to investigate the mineral composition and the sorbed arsenic content.

A total of five sites were investigated in the vicinity of Ullapara, about 120 km WNW of Dhaka. Several monitoring sites were recorded during this period and tested for arsenic and groundwater characterizing parameters. By means of comparable measurements at different seasons it could be determined at the majority of the sites that most of the measured parameters, e.g. also arsenic, are only subject to minor fluctuations. Significant changes in the annual cycle showed phosphate and organic matter, which were detected in significantly higher concentrations during the rainy season. Both parameters are demonstrably involved in the release of arsenic.

The work was carried out in cooperation with and with financial support from the Heidelberg-based association "AGAPE Hilfe für Slumkinder e.V.". During the period under study, four deep wells were constructed by the association. Two wells were accompanied by GEOW and sediment samples were taken. The geoscientific investigation of the sediment should complement the results of the groundwater investigations and contribute to the understanding of the process. The current focus of the investigations is on anthropogenic influences that may possibly increase the arsenic problem. Thus, the FAARM and AsFreeH2O projects directly follow on from this project.

Three different filter types for the elimination of arsenic using innovative adsorption technologies were developed for the Pabna site and installed at selected locations for test operation in April 2017. It is planned to test the systems in the autumn to ensure that they function properly and, if necessary, to optimise them for continuous operation. In the case of the filter systems, the focus is not only on financial viability and cleaning performance, but in particular on the sustainability of the cleaning process, including the return of used materials.

Within the project, cooperation has already been established with the University of Dhaka and the College Ullapara, which will be intensified in the further course of the project. Further cooperation to build up a database and continuous monitoring of As concentration is planned. The results of this project so far have been elaborated and documented in two Bachelor and three Master theses.

Geochemical investigations of the drinking water problem in Sylhet, Bangladesh

The Heidelberg Institute for Global Health (PD. Dr. med. Sabine Gabrysch) is investigating the topic of malnutrition and its influence on the growth of newborn children in a representative field study in Sylhet, Bangladesh. In this context, among other things, iron in drinking water will be investigated. Within the scope of the field study, the approximately 2,000 drinking water wells in the study area will be recorded, marked and sampled. In cooperation with the Institute for Geosciences (GEOW, Dr. Martin Maier), arsenic and the characteristic parameters through which the redox milieu can be derived will be observed in addition to the parameter iron.

The examinations are financed in cost sharing with the University Hospital and from GEOW's own funds. The current research results are presented in the project "Influence of human waste on arsenic release into drinking water in Bangladesh - geochemical and statistical investigations".

The results are also being incorporated into the AsFreeH2O project. The Sylhet site is to be examined more closely for a closer look at technological possibilities of arsenic removal and their social acceptance. Sylhet represents a very interesting environment for the studies due to the high arsenic contamination in water and the particular poverty of the population.