According to the United Nations (UN), clean water is one of the human rights, which is why access to safe drinking water is a key goal of sustainable development (Agenda 2030). The implementation of this human right continues to be a global challenge, as drinking water is polluted in many parts of the world.

One particularly serious contaminant is arsenic. Research shows that arsenic has a long-term negative impact on health, and can cause skin, lung, bladder, kidney, as well as liver cancer. It damages nervous, cardiovascular, and immune system function and is highly likely to have adverse effects on child development during pregnancy (Naujokas et al. 2013). Arsenic is predominantly ingested through drinking water. In many countries, groundwater contaminated with arsenic is a huge and neglected health problem. Argentina, China, Taiwan, India, Nepal, and Bangladesh are particularly affected. Arsenic contamination is particularly problematic in Bangladesh because of its dense population (Smith et al. 2000). Approximately 25% of Bangladesh's population (about 40 million people) is regularly exposed to arsenic levels in groundwater that exceed the WHO recommended limit (10µg/l) (BBS & UNICEF 2015).

Evidence shows that groundwater contamination is caused by naturally occurring arsenic and local biogeochemical processes. However, the exact mechanisms of the arsenic mobilization process remain unclear. In Bangladesh, arsenic is geogenic in origin and occurs in association with iron or carbonate minerals. Adverse conditions in groundwater lead to dissolution of the arsenic-bearing minerals and consequent release of the accumulated arsenic. Organic carbon is thought to enhance the process of arsenic mobilization ̶ by supporting microbial activity, which may influence the formation of reducing ratios (Lawson et al. 2016). In addition, phosphates may contribute to arsenic release by competing for sorption sites (Maier et al. 2017).

Arsenic mobilization is influenced by natural processes (Smedley & Kinniburgh 2002). However, for shallow tube wells, it is likely that human activity contributes locally to the process of arsenic mobilization. Ravenscroft et al. (2002) assume that weathering of peat is the natural driver of the mobilization processes occurring. However, they point to the need for more detailed investigation of the influence of latrines on the processes that occur. This hypothesis has not been pursued since. It is only in recent studies that the previously unconsidered influence of human sewage on arsenic mobilization has been revisited (Whaley-Martin et al. 2017). Both simple and improved latrine systems release fecal matter into groundwater (Escamilla et al. 2013), introducing microbial loads as well as phosphates and modern organic carbon into sediment and groundwater. Previous studies show that there is a negative correlation between fecal markers and arsenic contamination for wells in close proximity to sewage outfalls or latrines (McArthur et al. 2012). However, this work does not take into account that anoxic conditions are caused by microbial processes that are delayed in time. This makes it likely that arsenic mobilization does not occur until a certain distance downstream of the latrines. To fully understand the complex relationship and the geochemical processes occurring, a research approach is needed that takes into account the temporal and spatial context of sanitary influencing factors such as latrine type, location, and degree of use. 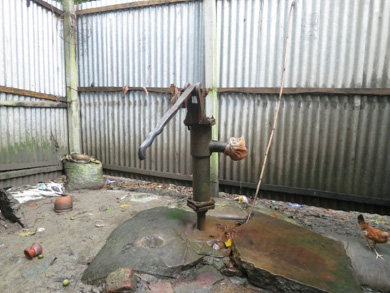 Fig. 1: Surface waters are often eutrophied due to domestic wastewater and feed the groundwater with organic matter and phosphate.

Fig 2: Almost every family has its own simple pump well. Often the technical equipment is inadequate and there can be vertical seepage of wastewater into the groundwater - for example, in the case of defective base plates as shown here.

Additional negative impacts on drinking water quality and arsenic mobilization may include common sociocultural practices in rural Bangladesh, such as inadequate disposal of wastewater, insufficient spacing between latrines and wells, or poorly maintained sanitation infrastructure (Escamilla et al. 2013, Dey et al. 2017). While the Bangladeshi population's acceptance of potential arsenic disposal methods has been extensively studied, few studies have been conducted on the rural population's perceptions and motivations regarding their sanitation behavior. 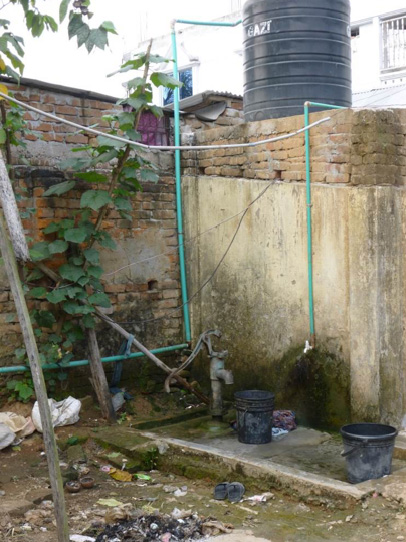 Figs. 3 and 4: As a rule, the pumping wells are right next to the simple latrines through which the sewage enters the groundwater untreated. The well in the left photo is located on the left outer wall of the latrine in the right photo, barely a meter away from the wastewater discharge.

Our goal is to understand how the complex interplay of sociocultural and sanitary factors influences the hydrogeochemical processes that lead to arsenic contamination of drinking water. Our research project will quantify the influence of sanitary factors on arsenic mobilization, taking into account sociocultural aspects of sanitary practices. In the long term, we would like to contribute to the development of alternatives to reduce arsenic contamination of groundwater more efficiently and to design policy guidelines for improved sanitation structures. This pilot project in Bangladesh is intended to provide a methodological basis that can be adapted for use in other regions with similar water problems.

The research project presented will take place as part of the Food and Agriculture Approaches to Reducing Malnutrition (FAARM) study, for which Dr. Jacobs has been working since December 2016. FAARM is a cluster-randomized study conducted by Dr. Sabine Gabrysch at the University of Heidelberg in collaboration with the aid organization "Hellen Keller International" (HKI). The study evaluates the impact of HKI's "Homestead Food Production" program on child growth retardation. 2700 young women from 96 villages in Sylhet, northeastern Bangladesh, are participating in the study. An intervention is being implemented in 48 villages, with women receiving support from HKI for growing year-round home gardens, keeping chickens, and implementing better nutrition and hygiene. The FAARM project provides the necessary infrastructure to study the complex anthropogenic impacts on arsenic. Sylhet is one of the most arsenic-polluted regions in Bangladesh. 38% of residents use groundwater that exceeds the WHO limit of 10 µg/l and 25% are exposed to arsenic concentrations above the Bangladeshi limit of 50 µg/l (BBS & UNICEF 2015). 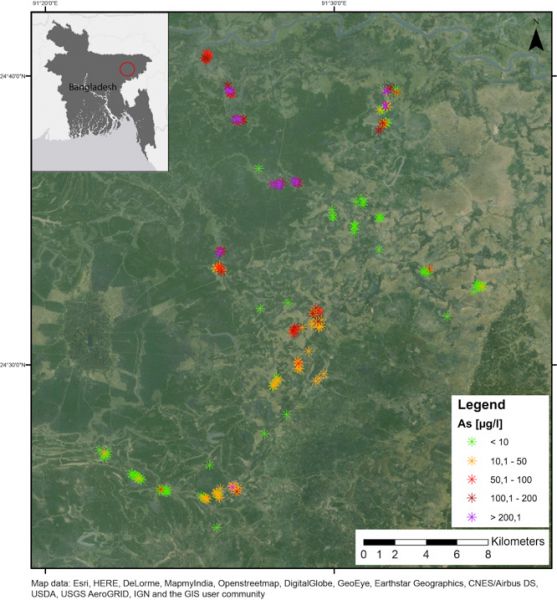 A survey was conducted in the spring of 2017 to collect information on well usage from 250 households within the FAARM study area. This involved numbering the wells and collecting water samples.

Laboratory analyses were conducted by Dr. Maier and the Hydrogeochemistry Working Group. The results show widely scattering arsenic concentrations from below the detection limit to more than 400 µg/l. 68% of the sampled wells exceeded the WHO limit of 10 µg/l and 35% were above the Bangladesh limit of 50 µg/l. Full measurement of all geochemical parameters is still ongoing.

Several hydrogeochemical investigations were conducted by Dr. Maier and his team between 2014 and 2017 in the Ullapara district in northwestern Bangladesh. These showed at three sites that wells with high arsenic levels occur particularly near intensively used latrines (e.g., in schools). This observation requires statistical verification by a sufficiently large sample size, which is possible at the Sylhet site.

The HCE-Start project will be used as seed funding to establish the collaboration and collect initial results for at least one joint publication. The project will also provide the platform for several interdisciplinary PhD theses. It is intended to continue the joint research to evaluate the applicability of the approach presented here in other regions.